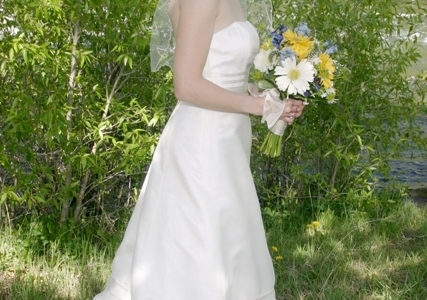 Since my husband has always vied with my dolls to be first in my heart, it was important to me to accommodate both of them on my wedding day—which took place eight years ago today. So not long after I said “yes” to the ring, I suggested to my fiancé that we place doll bride and groom centerpieces at each of the tables at our reception.

That did not go over well.

Instinctively jealous of his long-time rivals, my husband demurred, refusing to share our day with my beloved vinyl works of art. This, of course, got my hackles up, and we ended up nearly divorcing before getting married in the first place.

After we dug in our respective heels, intense negotiations followed. The upshot was a compromise in which we agreed to one dolly bride and groom to be placed on the gift table at our reception. It wasn’t what I originally had in mind, but I had been told that marriage was all about compromise, so I was willing to be the bigger person just this once.

After much long-distance preparation for a Colorado wedding, the Big Day arrived. The ceremony was lovey, if unconventional, and our guests entered the reception hall in fine spirits. The doll display generally drew smiles, particularly from the groom’s guests, many of whom had not been told of his now-wife’s obsession. But we were legally hitched at that point, so it was too late for them to talk him out of his obvious mistake.

Since many guests were the parents of young children whom they had made someone else’s problem for the evening, the dancing carried on until late, and the alcohol continue to flow. When I took the occasional break from the dance floor, I noticed that my wedding dolls were frequently changing positions, and it pissed me off a bit that my guests were taking liberties with them. But being a new bride made me temporarily indulgent of such behavior, and I so dismissed my concerns as petty.

When the festivities finally came to an end, and my new husband, our parents, and I were clearing the hall of decorations and gifts, I went to gather my vinyl bride and groom. To my dismay, I found them laying down, the bride’s gown hitched up around her neck, in what is traditionally referred to as the”69” position.

Part of me felt violated. A larger part burst into loud laughter.

About a month later, my husband and I developed the photos from the disposable cameras we gave our guests so they could snap pictures during the reception. (This was a common practice in the pre-digital Dark Ages.) Among the photos, we found picture after picture of my poor dolly bride and groom in nearly every sex position imaginable. Apparently, my dolls were more of a hit than I had realized. And our friends were much more immature than I had given them credit for.

(Editor’s note: Today’s post is dedicated to my husband of eight years. It’s been a crazy ride, and I think we’re stronger for it. I love you, Shawn. We have an exciting road ahead. Just keep swimming.)